Lyme disease My journey back to health

A female flying instructor in a large aviation company finds her state of health degenerating all of a sudden: increasingly unbearable physical pain, difficulty speaking, hallucinations, intense fatigue…
She sees one, two, ten doctors, finds the best specialists, undergoes dozens of medical examinations… But no one is able to identify the cause of her suffering. She is eventually referred to a psychiatrist.
Absolutely convinced, however, that her problems are real and willing to do anything to confront the disease that is eating away at her, she decides to fight.
Her journey, described in this autobiographical account, will lead her to discover that she is suffering from a full-blown chronic disease, transmitted by ticks, fleas and mosquitoes, known as Lyme Disease. Above all, she will discover that alongside the standard treatment (antibiotics), there exist alternative therapies which, although little known, are incredibly effective.

Judith Albertat is an airline pilot and instructor. She lives in Colomiers, near Toulouse (in southern France). Her illness has led her to retrain as a naturopath, nutritionist and quantum therapist. This is her first book. 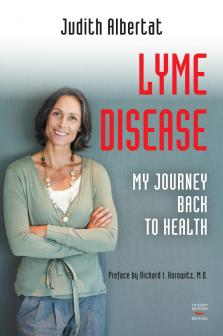